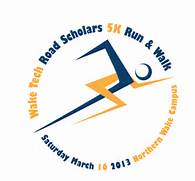 The Wake Tech Road Scholars 5K Run In 2013 over 290 runners and walkers signed up for this event which was part of the 50th Anniversary Celebration of the school’s beginning. Jim Stephens led the pack across the finish line in 18:30. Rachel Vidrine was the women’s champion after a 25:29 clocking. Since that was the first year the race was held, both performances are the course records.

This year they have added a mile run to the schedule. The mile will begin at 8:30 am, and the 5K will start at 9:00 am. Team competition has also been added this year. Teams will consist of between 3-5 members with the times of the first three finishers comprising the team score.

Pre-registered runners can pickup their packets and late entrants can register on Friday afternoon, March 14, from 4:30 - 7 pm or on race day beginning at 8:00 am.

Proceeds from the event will benefit student scholarship fund of the Foundation.