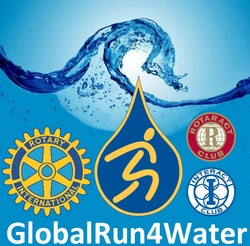 In its second year in 2013, over 170 runners and walkers signed up for this event which is put on by the Rotary District 7710 and takes place in WakeMed Soccer Park.

Alex Roy won the race in 19:06 which was a new course record for the event.  Laura Cove took the women’s title in 25:35.  Kristin Harmon holds the women’s course mark for this event of 24:06.

Registrants in the 5K can register either as a competitive or recreational entry. Competitive entrants will be issued a chip, will receive an official time, and be eligible for awards. Recreational entrants will not receive an official time, but they will be able to see their finishing times on a digital clock at the finish line.  The entry fees are the same regardless of whether one wishes to be timed or not.

The entry fee for the 5K is $25 ($30 after September 13th). For children ages 12 and younger, the fees are $15 and $20, respectively, if they are participating in the Recreational 5K. For the one-mile water carry, the fees are $10 and $15, respectively. T-shirts are guaranteed to all  those registered by the 13th.

Late entrants can register and pre-registered entrants can pick up their packets either on Saturday, September 29th, at Omega Sports in Crossroads Shopping Center in Cary from 11 am to 1 pm or on race day at the WakeMed Soccer Park beginning at 3 pm.