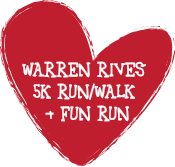 Both courses start and finish at the Millis Regional Health Education Center across the street from the High Point Regional Hospital in downtown High Point.

The entry fees are $20 for the 5K and $5 for the one-mile Fun Run. After September 1, the fee for the 5K increases to $25 up to and including race day. T-shirts are guaranteed to the first 450 entrants.

Late entrants can register and pre-registered runners can pick up their packets either on race day beginning at 6 am or at Omega Sports in High Point on Friday evening, the 19th, from 5-8 pm.

The race is named in honor of Warren Rives, Jr,, a hospital board member who died of a heart attack at the age of 41. All proceeds benefit the Heart Strides Scholarship Fund